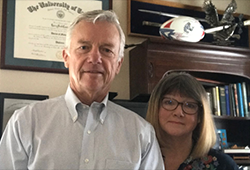 Harry Laws was a member of the very first USAFA rugby team in 1968, and, after graduation in 1969, he inserted the sport into his life's priorities. Active as a player for 20 years in places around the world during his Air Force career, he has also coached, refereed, founded numerous teams, and served in many local, regional and national leadership capacities. As he admits, "Rugby is definitely in my blood – it has been tremendously uplifting to me and I am thrilled to see the success of the Academy's programs."

While his involvement in rugby is high profile, he is equally passionate about his family, which consists of seven children and nine grandchildren at present. "My dear wife, Melany, has been so supportive of my activities, of my rewarding medical career, and the many USAF moves. Even now I continue in a part-time role as a clinical pediatrician," says Laws, who now resides in Wisconsin. He attended medical school immediately after his USAFA graduation, and he spent the next 25 years in uniform. Both in the Air Force and subsequent private practice, he held key administrative posts as well as serving as a clinical practitioner.

But it is the rugby pitch that draws his intense interest, particularly working to see the Academy programs thrive and build for the future. An engaged supporter of the teams since 1972, he founded the AFA Rugby Alumni Affinity Group in 2000, served as its chair for 12 years and continues on the board of the group, now renamed the AFA Rugby Foundation. "Our goal is to build a strong network of Zoomie Ruggers who are willing to help our teams in many ways. We have been rewarded to see on-the-field successes, including a recent national championship by the women's team."

Seeking both operational funding and securing significant gifts to fund an endowment for each team is Laws' current signature activity. He leads by example, recently adding the Air Force Academy Foundation as a beneficiary in his will to eventually donate to the endowed funds. "It is such a privilege to encourage our rugby alums to the AFARF Join the Ruck campaign. Melany and I, after making sure our family is provided for, are most pleased to support the campaign. I ask all of our ruggers to consider the same," he says. The Laws are now members of the Polaris Society in recognition of their future legacy gift.

As Laws reminds all alumni ruggers, "The process to arrange a future gift is not complicated, and the Foundation offers good assistance. Please join me in this means of supporting our teams."