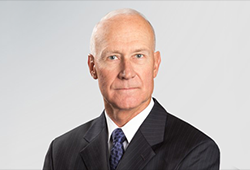 Chris Taravella is a proud member of the Class of '73, but he had to fight to gain entrance to the Air Force Academy.

Eagerly seeking an appointment to the Academy, the letter that arrived at his family's Pueblo, Colorado, home was one of rejection, citing medical disqualification for poor vision. Refusing to give up, Taravella began the waiver process.

"I was rather persistent, suggesting the Air Force needed officers in non-rated positions," Taravella said. The Air Force reconsidered and accepted Taravella to the Academy.

"Overcoming that seemingly insurmountable obstacle allowed me to have a very rewarding career," he says.

After his Academy graduation, he went to law school, served as a judge advocate in the Air Force and Reserve for 21 years and retired as a lieutenant colonel.

"Starting out as a prosecutor with over 100 trials was my ticket into greater responsibilities at the Pentagon," Taravella says.

In 1985 he left active duty to join the Chrysler Corporation as head of the litigation department, serving under CEO Lee Iacocca. Later, his USAFA mechanical engineering degree was put to use when he served as Chrysler's chief patent counsel. Finally, he was promoted to serve as general counsel at DaimlerChrysler Financial.

In 2006 Taravella returned to Colorado, which allowed him to serve the Academy in numerous ways. He has repeatedly been on the service academies merit selection panels for two U.S. senators from Colorado. His greatest joy is occasionally being a guest lecturer in the Academy's law and management departments.

"My passion is to interact and help cadets. I want to show them that setbacks can be overcome," he says.

He has also represented service veterans and their widows in a pro bono capacity, including matters before the U.S. Court of Appeals for Veterans' Claims, the Veterans' Administration and the Air Force Board for Correction of Military Records.

Taravella's commitment to USAFA also includes philanthropy, supporting the Class of '73 endowment to support the National Character and Leadership Symposium. He has been a Sabre Society donor since the inception of the program.

Recently, Taravella arranged for a future legacy gift to the Academy through a charitable bequest in his will.
"The importance of private support for our Academy is greater than ever, and I'm pleased to help. I challenge all my classmates, indeed all grads, to support our school, both now and in the future," he says.

In recognition for his legacy gift, Taravella is a member of the Polaris Society.

Professionally, Taravella is a partner at Montgomery Little & Soran, with areas of focus in commercial litigation, patents, trademarks and copyrights.

And the vision issue? Not only does his legal practice include aviation law, he holds a commercial, instrument-rated, multi-engine pilot license.