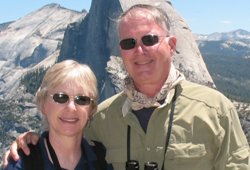 As long time Sabre Society donors Dana '70 and Linda Ewan Arbaugh have also qualified as members of the Polaris Society, which recognizes those persons who have made a commitment to support the Air Force Academy in the future. Dana elected to name the USAFA Endowment as a sole beneficiary on one of his three paid-up life insurance policies.

Married one week after graduation (Linda from Colorado Women's College, also in 1970) in Linda's home town of Sheridan, Wyoming, they were honored by nine of Dana's classmates who attended the wedding as best-man and sabre bearers. Remarkably, all ten have stayed in touch over the subsequent 40+ years, becoming a "Band of Brothers" long before the media picked up on the phrase.

Dana enjoyed his Air Force service as a C-130 and C-141 navigator. He also served as an associate reservist with Space Command, retiring as a Lt Col in 1994. His retirement from a successful Silicon Valley career occurred in 2008. Linda has been a career librarian since completing graduate school during Dana's Southeast Asia duty year. She is presently in charge of their city's large public library in Milpitas, California.

Says Dana, "There is no doubt in my mind that the majority of us have succeeded in life as a direct result of our USAFA graduation. The least we could and should do is to acknowledge this fact by giving something back to our alma mater. It is truly the right thing to do!" Dana has implemented this message while here through his Sabre Society membership, and will do so again via his Polaris Society membership when gone. The Endowment acknowledges and appreciates their generosity.

For more information on how you can arrange for a future gift to the Academy and qualify for Polaris Society membership, contact Dale Zschoche. He may be reached by phone at 719-472-2059 or email at dale.zschoche@afacademyfoundation.org.