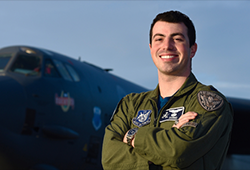 For Capt. Julian Gluck, a B-52 pilot and flight commander at Barksdale Air Force Base, service means more than just his Air Force career; it means continually finding opportunities to make a positive impact. From volunteering as a child through his time at the Air Force Academy and even on deployment, Gluck seeks out opportunities to give back. Gluck says, "Whether through time, talent, or treasure, I have found that there are opportunities for altruism and stewardship wherever you look."

Inspired by the service of his family and understanding the blessings in his life, Gluck developed his own passion for volunteering and paying it forward. Prior to his time as a cadet, he began volunteering with a variety of organizations, including the Civil Air Patrol, where he mentored fellow students and organized summer activities for children in his community.

Joining the class of 2012 at the Air Force Academy did not slow down his efforts of giving back; as a cadet, Gluck still found the time to volunteer over 600 hours. That time included holding leadership positions with civic groups, setting up a concert to benefit wounded warriors, organizing a lumberjacking event to help young and expectant mothers, mentoring immigrant children from Ethiopia, and selling doughnuts to raise chapel funds.

"I feel intrinsically motivated to strive to contribute where I can to the general good," Gluck says.

Once he graduated, he continued on the path of finding opportunities to help. While deployed to Al Udeid Air Base, Qatar, Gluck helped provide necessities such as t-shirts and undergarments to foreign workers on base. Expanding his efforts in-between combat missions, he collected unused care package items to fill 27 boxes of food, medical supplies and children's toys that he then donated locally in Doha for distribution to foreign workers in need. For his exemplary military service beyond the call of duty, Gluck was honored as the 2018 Air Force Times Airman of the Year. He was also recently selected as the only military member on the 2020 Forbes 30 Under 30 list.

Looking back on his time at the Academy, Gluck credits many donor-funded cadet programs and unique learning experiences with enhancing his experience and helping prepare him to be a better officer and leader. He served as an intern in the Senate through the Cadet Summer Research Program and traveled as part of the Cadet Summer Language Immersion Program to Japan. He also helped the a cappella group In The Stairwell to become an official club and receive donor funds to assist their efforts.

Gluck knows firsthand how donor funds can enhance the cadet experience and provide unique learning opportunities that federal funding does not cover. He feels it is important to thank those donors who helped enhance his experience by continuing to pay it forward. To make an impact now, in addition to donations, he feels the Polaris Society is a great way to give back and is proud to have set up a bequest for a future legacy gift that will benefit cadets.

Gluck (Instagram: @JulianRGluck) hopes to inspire other younger graduates to consider donating to those programs and clubs that enhanced their experience.