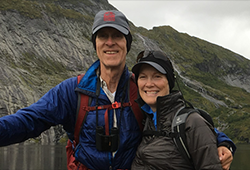 John Wigington, a graduate of the Class of 1973, majored in international relations and began his 27-year Air Force career earning a master's degree from the University of Pittsburgh. The Georgia native then found himself working in various intelligence roles at bases around the world.

"I was lucky to have really good assignments, and overall I was very satisfied in how my career played out. But there were times when I had to make a case for what I thought was best," Wigington remembers. "I encourage young officers to fight to stay in the good jobs that will bring them fulfillment and satisfaction."

Following a final posting as director of the Missile and Space Intelligence Center, Wigington began a follow-on career with a defense contractor in Huntsville, Alabama. Now retired and residing in a Tennessee golf community, he and his wife, Susan, have become avid hikers. John has traversed the entire 2,190 miles of the Appalachian Trail, the Colorado Trail, and the Benton MacKaye Trail.

At the Air Force Academy, Wigington has become engaged with the National Character and Leadership Symposium (NCLS). His involvement began when his Class of '73 was raising funds to help NCLS, and their success led to being the flagship sponsor. Having returned to USAFA to attend numerous symposiums, Wigington was impressed with what the Academy offered cadets.

"When I was a Zoomie, leadership was embedded in the chain of command. Now, it is apparent there are broad leadership opportunities abound, which is so important as cadets enter service and in all aspects of their lives and post-Air Force careers," he says. "The Academy is light years ahead of what it was like 50 years ago. This is why I am willing to make an investment to support NCLS."

John and Susan have made a legacy provision as part of a living trust for the Class of '73 Endowment for NCLS, resulting in Polaris Society recognition. Plus, they intend to take advantage of using their individual retirement accounts to make qualified charitable distributions when they soon reach the eligible age.

He readily states, "I'd rather not be taxed on income we don't need, so giving it to worthy causes is far better. I encourage my classmates and all graduates to help our Academy in these ways."