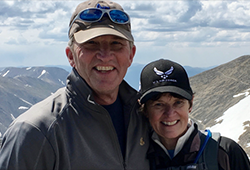 For Dave and Sue Ross, both 1983 Academy graduates, climbing has been a hallmark of their military, professional, and personal lives. On top of Sue's trainers and KC-135, or Dave's B-52 and 767, ascending into the atmosphere is also done with boots on the ground – they have climbed five of Colorado's 14,000-foot peaks, as well as a 16,000-foot pass in Peru.

Sue remarks, "After two flying assignments, I was fortunate to return to USAFA to teach English for two years and fly with the glider squadron. I also served as department honor liaison officer and a squadron associate AOC." She went on to become a T-37 squadron commander, KC-135 group commander, and speechwriter for the Chairman of the Joint Chiefs of Staff before retiring in 2005. She then founded a communications consulting company, teaches college English, and publishes the service academy candidate book series. She served for four years on the USAFA Board of Visitors, and is squadron ethics advisor for CS-09.

Dave was honored with the Distinguished Flying Cross for leading the longest low-altitude combat mission in Air Force history, striking targets deep in Iraqi territory. His experience is chronicled in the book Triumph Without Victory. In 1992 he began his commercial career, starting in DC-8s and eventually retiring as a Boeing 767 captain and check airman for ABX Air in 2018. "The leadership opportunities at the Air Force Academy are second-to-none," says Dave, who served as USAFA Prep School group commander, group sergeant major, and CS-21 Squadron Commander. "It helped prepare me for my roles as pilot union president and chair of the Government Relations Committee of the Coalition of Airline Pilots Associations," working with Congress and across the government on commercial aviation safety and regulation. He now teaches Crew Resource Management part time for ABX.

The couple, who now live just north of USAFA, have ascended into several recognition programs of the Air Force Academy Foundation. "We believe strongly in giving back. We work with foster families, our church, the local food bank, and of course USAFA," explains Sue. Regular current donors, they revised their estate plan to provide future support for the Academy. Thus they are members of the Polaris Society. Dave says, "We look at supporting USAFA as an investment with guaranteed dividends. We know what grads will do for the Air Force, our country, and their communities."

For more information and assistance for Academy legacy support, contact Dale Zschoche at the AFA Foundation.